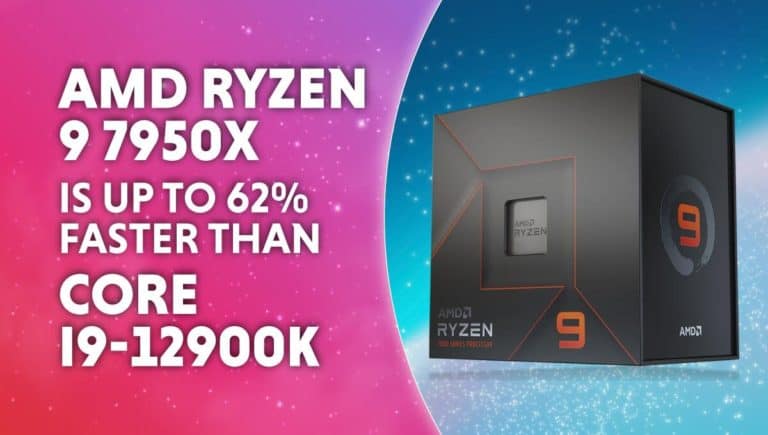 Ryzen 9 7950X is up to 62% faster than the i9-12900K: AMD recently held an event on its YouTube channel called “Together We Advance PCs.” At that event, AMD revealed some very exciting information about Zen 4 CPUs in general.

However, AMD CEO Dr. Lisa Su dug a little deeper into the Ryzen 9 7950X and listed its performance specifically compared to the competing flagship, the Intel Core i9-12900K. Lisa also gave us a little rundown of the Ryzen 5 7600X’s performance in F1 2022.

AMD CEO Dr. Lisa Su, during the “Together We Advance PCs” event, compared the performance of the Ryzen 9 7950X to that of the Intel Core i9-12900K. The two flagships faced each other in eight applications.

Here are the results of the comparison with the 12900K.

Generational performance of the creator

As you can see, the Ryzen 9 7950X puts those cores to good use in multi-threaded “creator-facing” tasks. But then again, AMD has always had the upper hand in multi-threading performance.

What is interesting to note is the glaring increase in single core performance that gives an advantage in some games. DOTA2 is a relatively easy game to run on most systems, but a 23% performance increase it’s still a considerably big performance boost no matter what.

At the higher end of the performance scale, we can see the 7950X outperforming the 12900K in the V-Ray benchmark.

During the AMD event, AMD CEO Dr. Lisa Su also compared the Ryzen 9 7950X to the previous generation Ryzen 9 5950X. Obviously, the Ryzen 9 7950X came out on top by a significant margin – the word “erased” comes to mind.

Here are the results of the comparison with the 5950X.

Generational performance of the creator

When will you be able to get your hands on the new AMD flagship? Well, the release date of all Ryzen 7000 series Zen 4 CPUs was confirmed by AMD CEO Dr. Lisa Su as September 27, 2022. This is the date we expect to see AM5 processors and motherboards on the shelves.

The performance of the Ryzen 9 7950X looks very promising compared to the i9-12900K, the i9 of course is part of the previous generation. So it remains to be seen how well the Zen 4 series of CPUs will perform when pitted against 13th generation CPUs. But that won’t be for a while yet.

Rest assured, we’ll be putting all Zen 4 CPUs to the test when we get them, stay tuned for the full Ryzen 7000 series benchmarks.