Back in March, one of our favorite gaming mice of the year crossed our desk courtesy of Roccat, the German hardware manufacturer housed under the corporate umbrella of Turtle Beach. The $89.99 Roccat Kone XP had it all: premium switches, a great sensor, tons of functionality, RGB lighting, and a pretty reasonable price for its feature set. So where do you go from there? Roccat has tried to improve on the Kone XP by cutting the cord: the Roccat Kone XP Air is the same top-of-the-line mouse, but now with 2.4GHz wireless and Bluetooth support. Unfortunately, the price almost doubles to $169, depleting the Roccat’s attractive value. Still, the Kone XP Air is arguably the wireless gaming mouse to beat, beating the competition in many of the most important areas.

At first glance, the Kone XP Air and its wired sibling look almost identical, but put them under a magnifying glass and you’ll see some fine details that set them apart. The bulky casing of the XP has been shaved down a bit and the glossy finish on the plastic casing has gone matte, giving the 3D RGB lighting a deeper hue.

With a slightly slimmer waist than the corded Kone, the XP Air measures 1.5 by 2.8 by 4.9 inches (HWD). That’s a bit wider than the competing Razer DeathAdder V3 Pro. Weight-wise, it tips the scales at about 3.5 ounces, heavier than other wireless gaming mice like the HyperX Pulsefire Haste or Roccat’s Burst Pro Air. 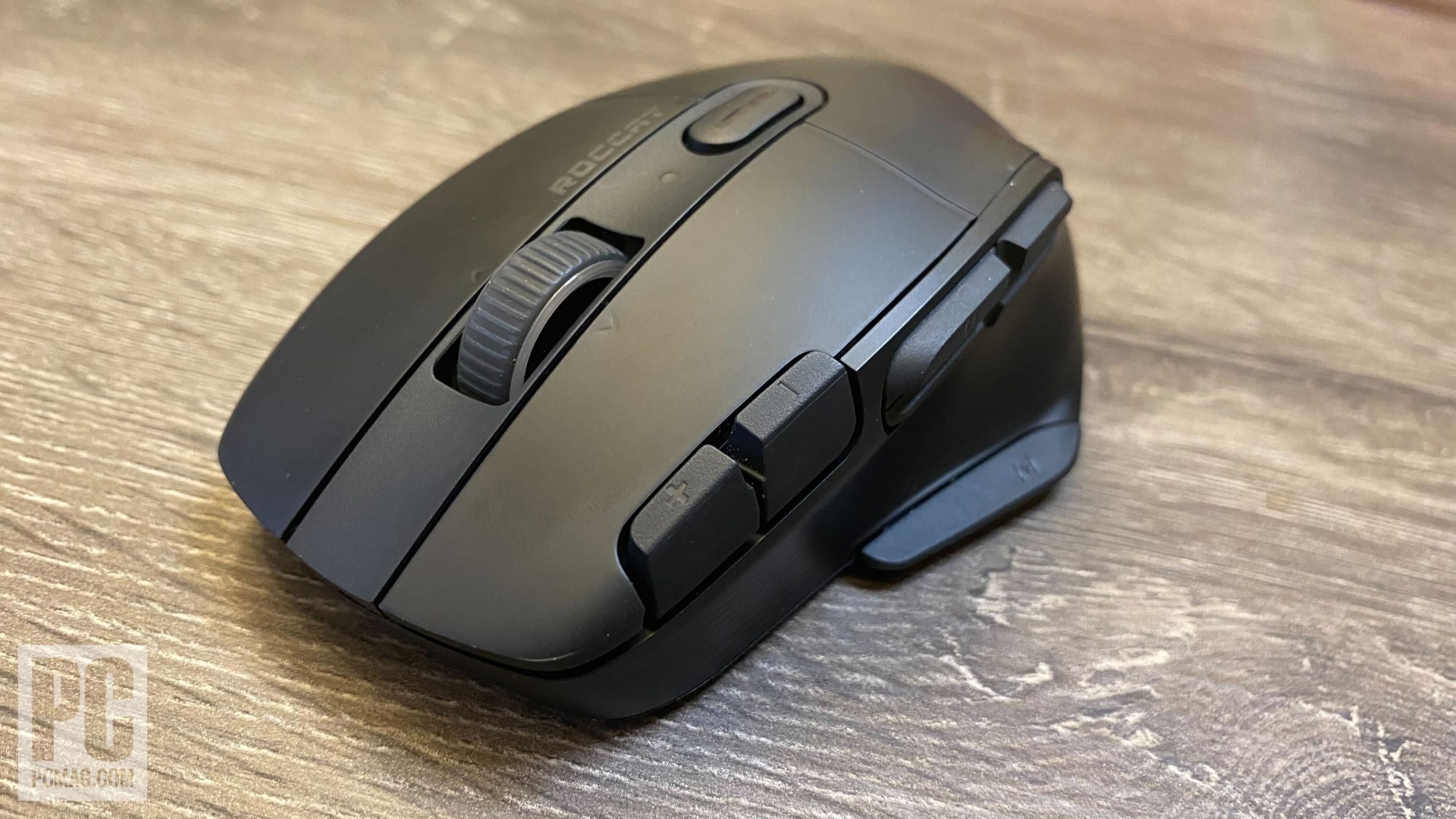 Ergonomically, the Kone XP Air is just as comfortable as the original as long as you’re right-handed. A massive 15 total buttons on its chassis make it the MacGyver of gaming mice, and Roccat’s EasyShift technology allows you to increase the number of button functions to 29, ideal for strategy games and MMOs. All buttons are easily accessible with your thumb and forefinger, while a small lip on the edge provides additional comfort, as well as an additional button.

As with the wired model, Roccat’s Titan optical switches claim to be faster than other mechanical switches and twice as durable. The extremely cool 4D scroll wheel is back, complete with RGB adjustment, and Roccat’s Owl Eye sensor still offers a very respectable 19,000 DPI and 1,000 Hz polling rate. Razer’s two latest professional gaming mice, the DeathAdder V3 and the Viper V2 offer even higher resolution by a factor of 11,000 dpi, so while the Kone XP Air is fast, it’s not the fastest mouse on the market. 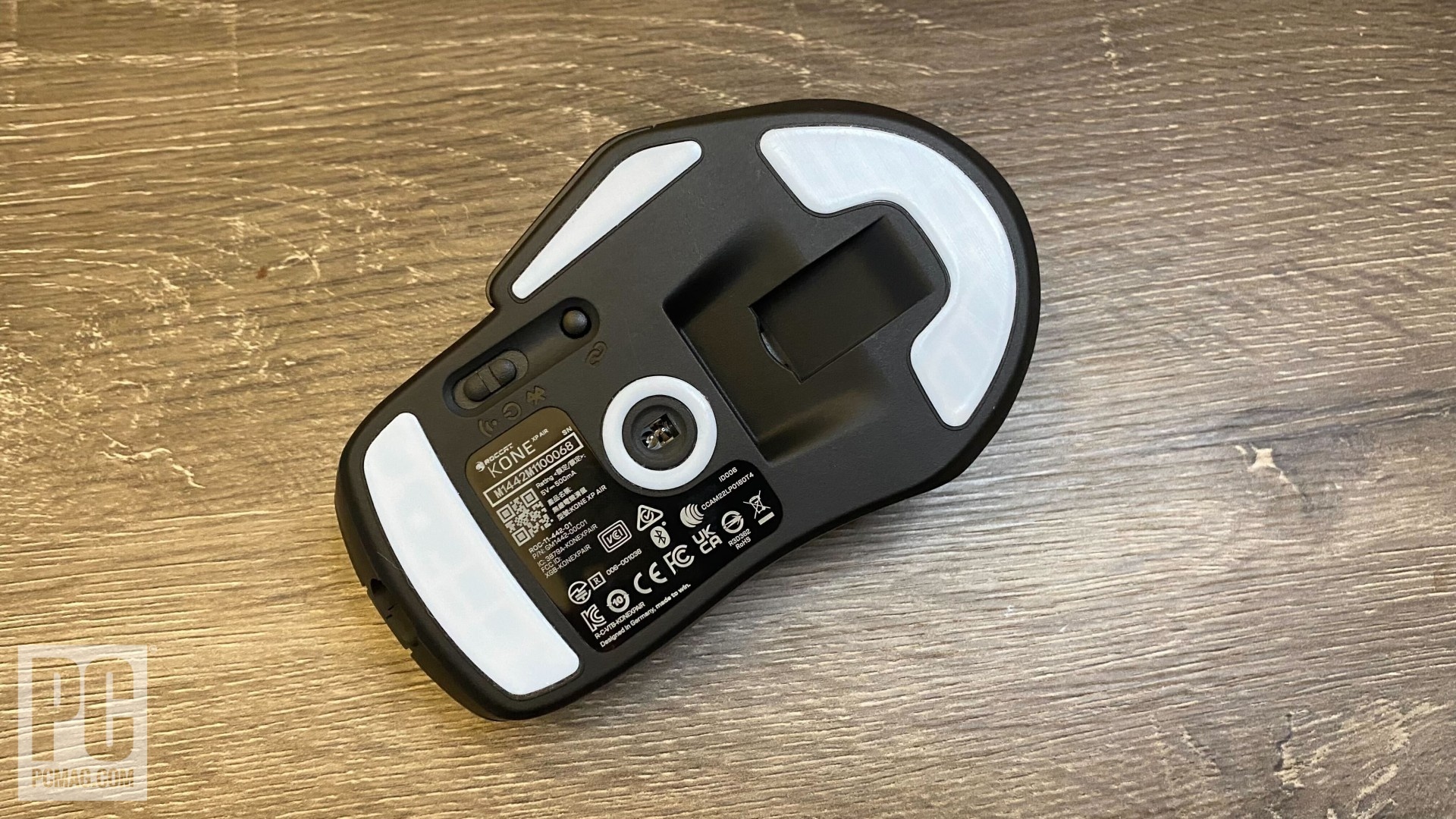 What it lacks in raw resolution, the XP Air perhaps makes up for in Nvidia Reflex, depending on your playstyle. The GPU manufacturer’s technology allows developers to integrate low-latency features directly into their games of choice; You will mostly find it in popular FPS shooter games like Overwatch and Call of Duty: Modern Warfare. Nvidia Reflex + Boost can reduce latency by milliseconds, but pro gamers know that a little difference can mean life or death when leading your team in a ranked match.

I rarely find myself in such high-pressure situations, but I admit that every little extra helps. Rest assured, whether you were playing Overwatch or clicking through Final Fantasy XIV, the XP Air’s wireless signal remained strong at all times, with no noticeable lag or random dropouts.

Obviously, the main difference between the Roccat Kone XP and the Kone XP Air is that the latter is wireless, comes with a 2.4GHz USB dongle, and is Bluetooth compatible. Switching between signals is handled by a lever on the belly of the mouse. There are two ways to charge the device: via a flex cable plugged into the USB-C port at its tip, or by using the included fast-charging docking station. 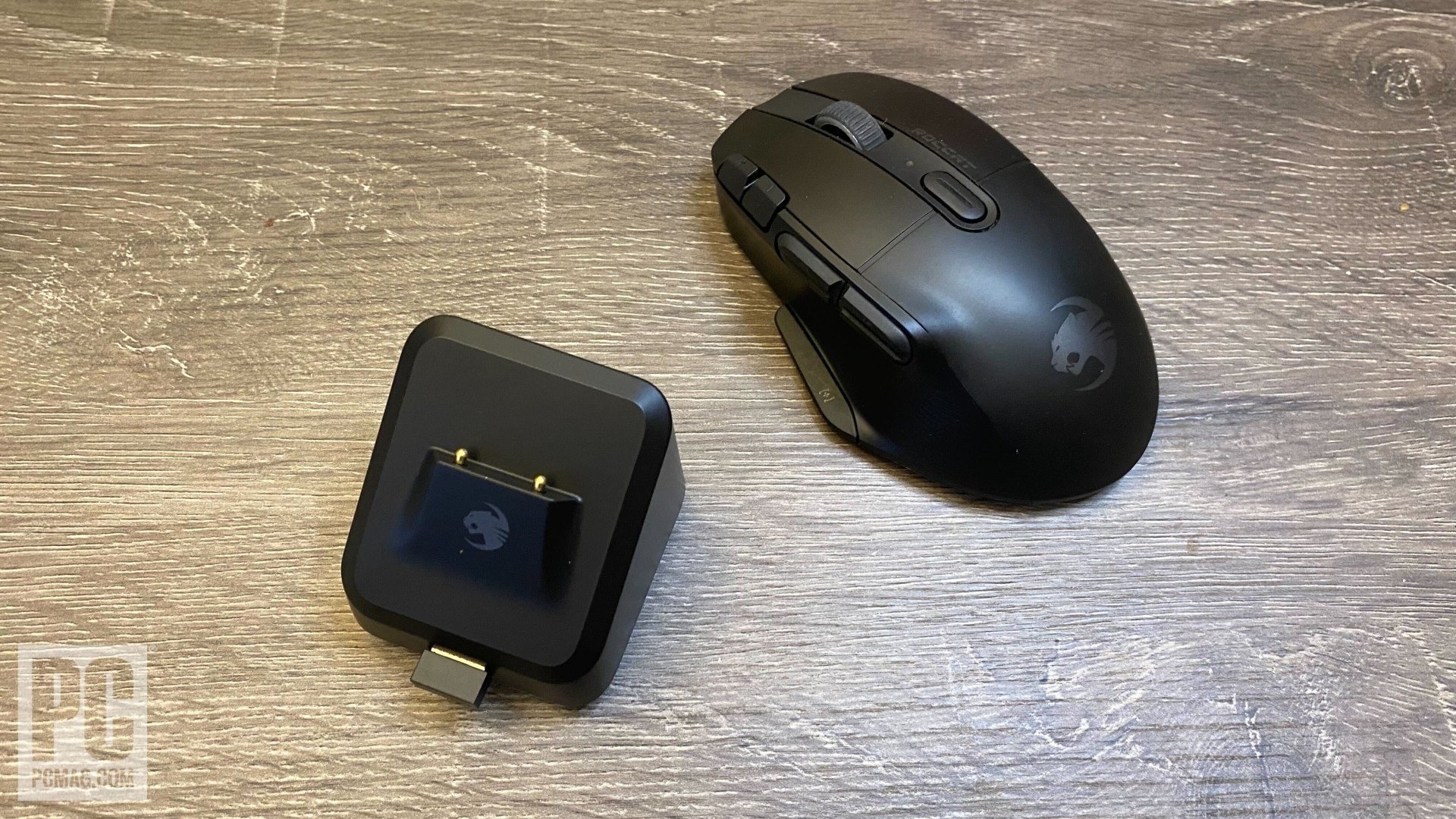 The AIMO Fast Charging Station, as it’s formally known, is a small dock with USB-A and USB-C ports. Simply plug the cable into either end or place your mouse on top of it. The dock has its own RGB lighting ring, and an indicator light on the top of the mouse above the center dpi button lets you know when it’s full. The charging cradle works well, although it’s a bit sensitive and prone to accidentally slipping out of position. Roccat promises around 100 hours of battery life, plenty of time though dwarfed by other wireless gaming mice like the 420-hour Alienware Tri-Mode. 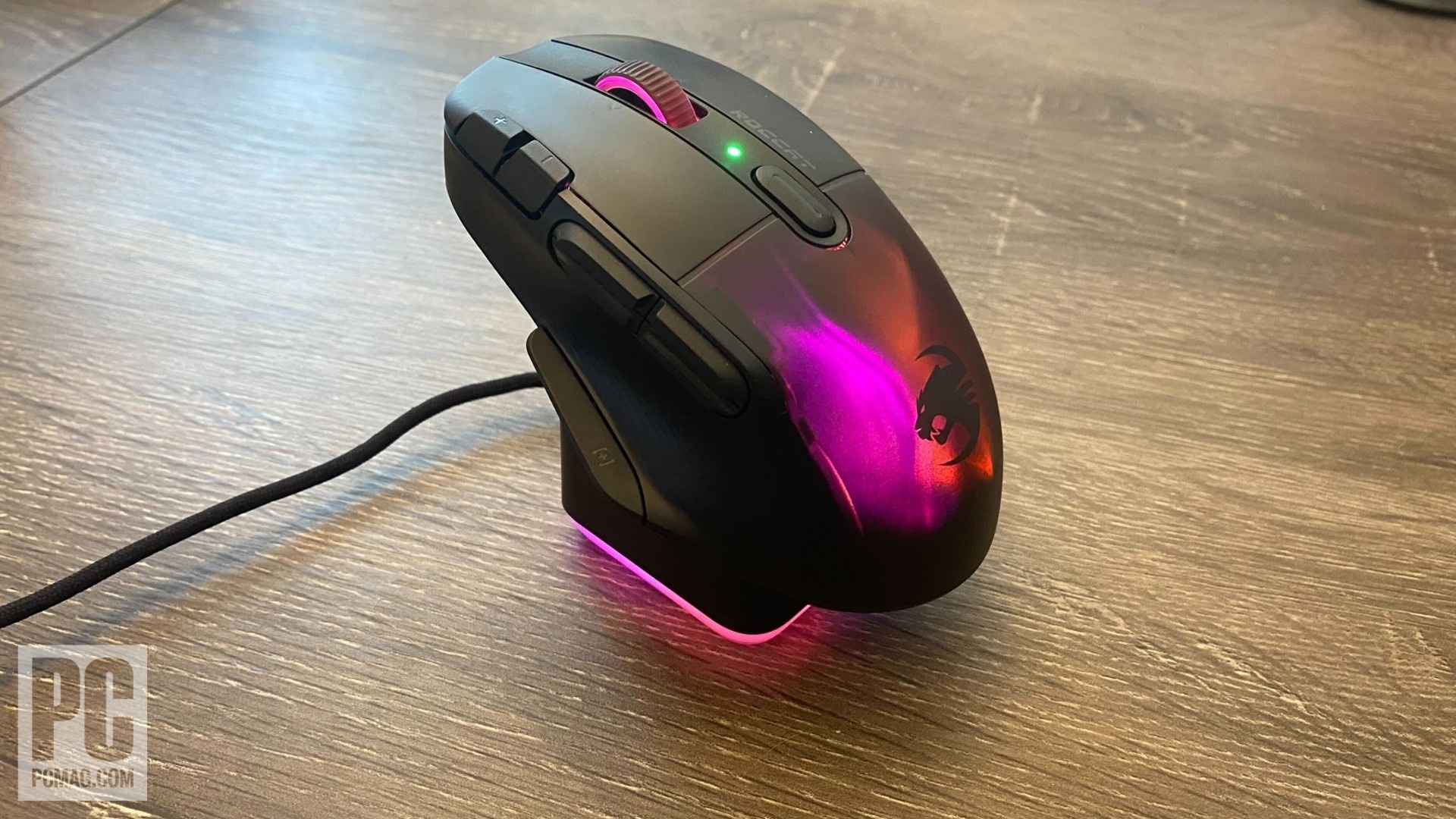 Roccat’s Swarm software offers plenty of customization options across five mouse profiles. Remapping buttons, creating macros, and adjusting RGB lighting – all the features you’d expect are here, and the menus are simple and easy to navigate. The distinctly lo-fi aesthetic remains, but Swarm earns a pass for being so feature-rich and easy to use. 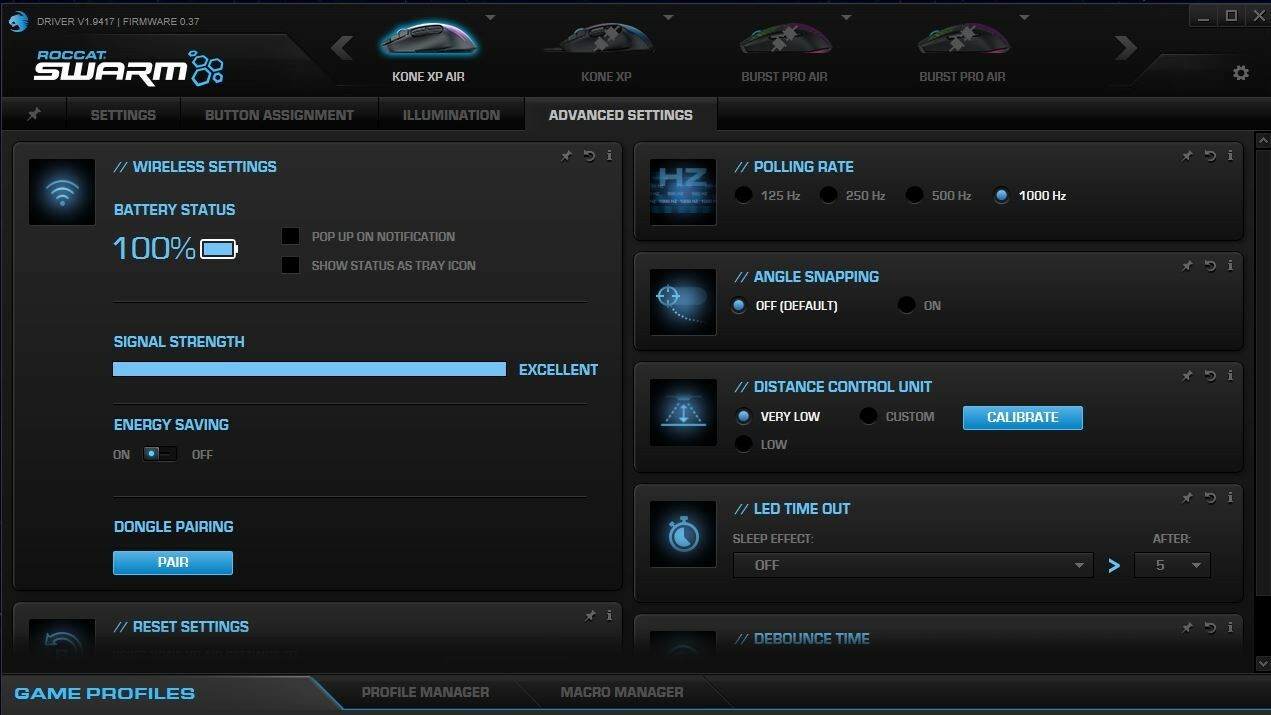 As mentioned, the biggest change is the price. The Roccat Kone XP was a bargain at $89.99, but at $169 the wireless version is considerably harder to swallow. Even Razer and Alienware, two brands that aren’t exactly known for their bargain prices, usually go for around $150. The high price is probably due to the included charging dock, but if I were Roccat I’d ditch it or sell it for separately, because otherwise the Kone XP Air is one of the best wireless mice you can buy. It’s a shame to see it out of reach for many buyers, but for many people, $169 will be a bridge too far.

Leave the dock, take the cable

Complaints about cost aside, the Roccat Kone XP Air earns a spot as one of our favorite gaming mice. It looks good, it’s packed with features, and its wireless gaming is solid. It’s just not worth the hefty premium over the corded model, in our opinion. It’s still a great mouse, but if wireless mice with charging pads are your thing, you can save $20 with the older Razer Viper Ultimate.