Sennheiser will start shipping its fourth-generation Momentum noise-canceling wireless cans this week, throwing down the gauntlet to Apple, Bose and Sony in the hotly contested premium ANC headphone market. 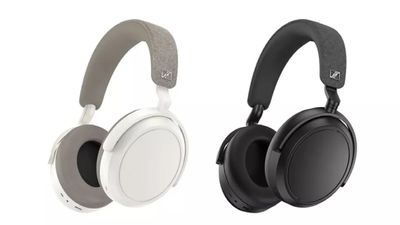 The Momentum 4s boast a headline-grabbing 60 hours of listening time on a single charge, and also feature a complete redesign of the company’s flagship Momentum line for more comfort and less “tightening,” says Sennheiser.

The visible cables are gone, while the metal hinge and leather exterior are replaced with a simpler plastic design with ear cups that rotate flat when stowed away. Many of the physical controls have also been removed in favor of a touchpad on the right cup that responds to gestures.

Sennheiser says the headphones feature improved adaptive noise cancellation and transparency mode (60-hour battery life listed is with ANC on). There’s a quick-charge feature that provides six hours of use in 10 minutes, and the headphones are also equipped with an auto-off feature that kicks in when the cans are removed, and is ready to turn back on when you pick them up.

Sennheiser says the new 42mm driver system inside offers “brilliant dynamics, clarity and musicality”, while users can personalize their audio experience using the built-in equalizer, preset sound modes and a new personalization feature. Sound. Meanwhile, the Momentum 4 multipoint connects two devices at the same time, like an iPhone for music and a Mac for video calls, and the headphones come in a redesigned hard case.